One of the cheaper boards for building your own 3D printer is the Melzi Board.   It is popular among the Prusa I3 builds that a lot of shops offer in kit form.  We get a lot of requests to see if this board will work with our lasers and the answer is YES!  We are going to use the same approach that we have on many of the other electronic configurations and use the FAN connection for the laser.

Details of the Melzi board are here on the RepRap website:  http://reprap.org/wiki/Melzi

Hooking the Laser up The software is the same for all of the upgrades here.  The commands to turn on and off the laser are:

Using PWM to control the laser

Now that you have it all set up, there are a few ways to engrave with the laser.  Here is a quick post on some of the different ways along with some tutorials on getting started.

Then simply run the file in whatever program your printer uses!  Voila! 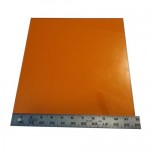 We sell laser shielding to block laser radiation and reflections! Laser Goggles are also a must!